Posted on August 28, 2017 By sailingwithjosh 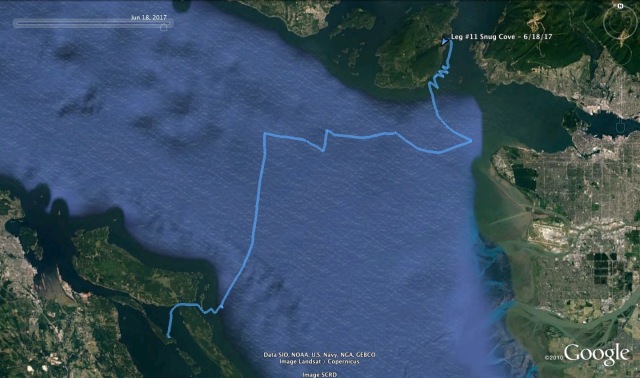 We weighed anchor at 9:50am after breakfast, more water runs and boat chores. The stern tie came off without a hitch and the handle I attached to the spool for cranking in the line worked well. Once the stern tie was safely aboard, I deflated the kayak as towing it across the Strait of Georgia should only be done in settled whether. The south wind was blowing pretty good so I wasn’t going to chance the painter separating on the Strait. The Strait of Georgia with a good wind can be a lot of fun, or a nightmare, depending on how you interpret it. There can be a lot of current in the Strait and if a strong wind opposes it, big, steep waves will occur. The fetch should be 100 miles. Crossing it is not be taken lightly. This would be my fifth time crossing it and I have seen conditions from 20kts to a dead calm. Personally, I prefer some wind as the boat and I like to sail better than we like to motor. It’s good experience as it can be one of the bigger challenges of the inside passage. I left Pirates Cove using the same range that I obeyed on the way in, but it was a little trickier as the wind was blowing from behind and the range was observed from behind. It is typically easier to maneuver a boat when heading into the wind and current and as you can imagine, easier to keep a range lined up when it is in front of you instead of behind you. I wasn’t particularly pleased on how it went, however, I didn’t hit anything, so it was a success.

Once out of Pirates Cove, I traveled east over Pylades Channel as my plan was to go through Gabriola Passage. I have never used this pass before, but like most of the major passes in and out of the Gulf Islands, it is safest to travel near slack water.  Currents can hit up to 8 knots on a spring tide. There were some tugs putting together a log boom, headed in my direction and my timing was right on, so I started the motor and got the jump on them.  To have not gotten in before them would have meant a wait, stronger current and more possibility for debris in the water. I met some boats coming the other way and they may have had to wait out the tugs as the narrow spot of the pass would not have allowed that kind of 2-way traffic. On the Straight side, there are some reefs to mind on the exit as well as the offshore rocks, Gabriola Reefs. It seemed as this would be easy at first, but I soon realized, not so much. The flood was stronger than I expected and I believe the Frazier River freshet was pushing me north, plus the wind was out of the south. All three forces were pushing me north, in the direction of the reef,  but I tacked a couple of times and used a little iron wind to just be sure. 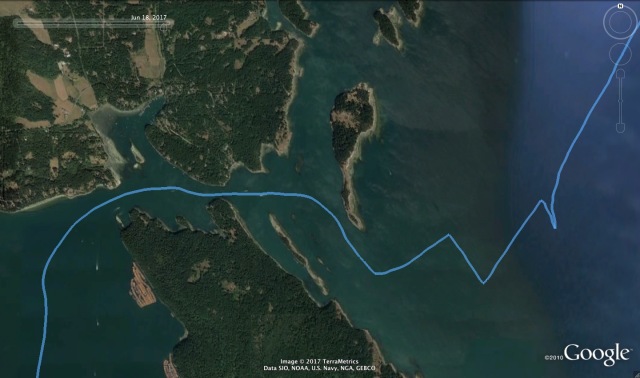 Gabriola Passage. Notice the log boom staging area in the lower left corner and the narrow bit in the center left. 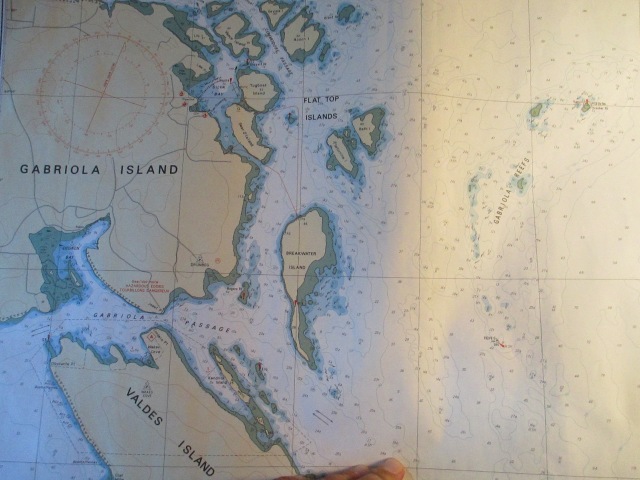 The Canadian Hydrographic Chart shows the reefs in the Passage and Gabriola Reefs in the upper right that you cannot see on Google Earth.

After that excitement, the wind steadily diminished as I crossed the Strait until there was not enough wind to keep the sails full in the still rolly seas. 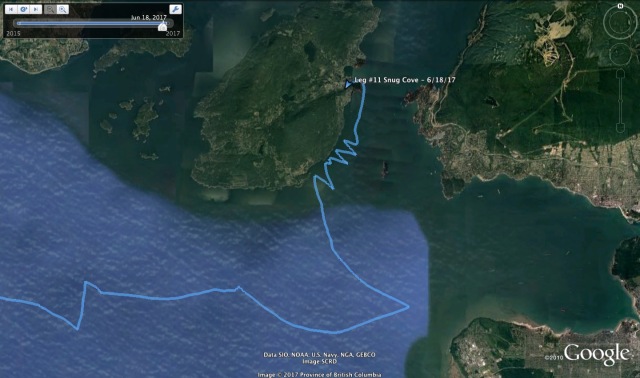 My original destination was intended to be False Creek in Vancouver, however the strong forces that drove me north put an end to that idea. I motored for a little bit, getting my bearings and trying to figure out where to go. The air was hazy and the Strait of Georgia is about 20 miles wide, so piloting can be a bit tricky. You can see land, but “which land is it?” I motored in the Vancouver direction until the seas settled a little and I realized that I was picking up some outflow wind from Howe Sound. Howe Sound is the fjord just north of Vancouver and it has its own weather patterns and forecast. Thermal winds play a big part in its weather and in this instance there was an outflow that I was feeling. I thought, “maybe I can make Vancouver after all,” but alas, this was wishful thinking. As I approached Vancouver the wind both slowed and backed as I moved out of the airflow. So I tacked over and decided to stay in the wind and see if I could make it to Snug Harbor, on Bowen Island, just inside Howe Sound. I had been to Snug Harbor on a previous trip and I knew there was a possible anchorage and a government dock. 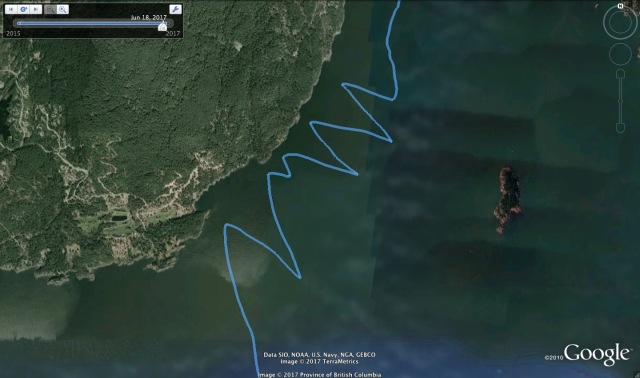 Slow progress against wind and current at the mouth of Howe Sound.

The wind was good, but dead ahead, and I did not have the tides on my side, so progress was very slow. I had expected to have some tidal help but I had it wrong. There may have also been some heavy fresh water outflow too, from Howe sound, as we were in the middle of the June mountain snow melt. In fact, there was a regular Securite on the VHF channel 16 from the Coast Guard warning mariners about the heavy amount of debris in the Strait of Georgia from the Frazier River runoff due to the heavy snows they had this winter. I can confirm it to be true. I was on the constant look out and often adjusting course to avoid floating logs and debris when I was on the east side of the Straight. 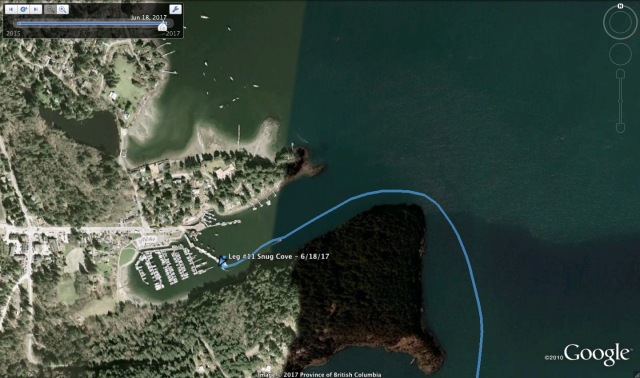 I was running out of light, so I wanted to get into a port, especially with the debris around, so I finally gave in and motored into Snug Harbor. It turns out the favorable side of the government dock was still reserved for winter moorage, so I ended up on the ferry side of the dock. You are exposed to a bit more turbulence from the ferry wash but it was manageable and for $8US, expectations need to be low. The anchorage did not look too promising as there were a lot of permanent boats in there and I did not have the kayak inflated. Inflating the kayak is a good half hour production and I had my mind set on having a beer at the local pub and using their internet connection for some modern world communications. I got the boat settled on the dock, paid my fee and headed to the pub. After my beer and internet, I headed back to the boat, tidied up and settled in for the night. It had been a 12 hour day of boating, which was long for this trip so far. 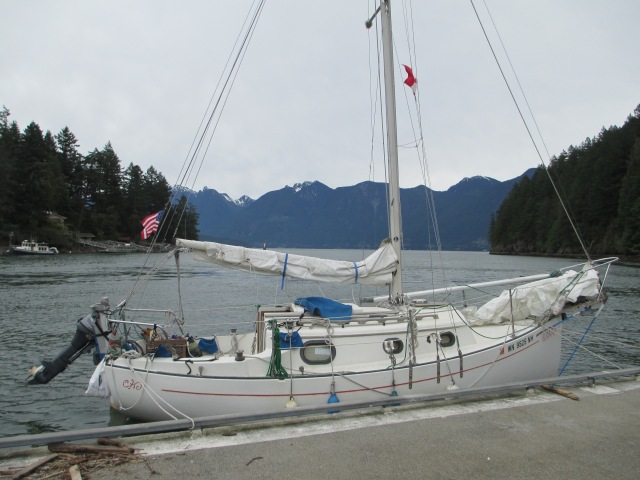 Sampaguita and the view out of Snug Cove. 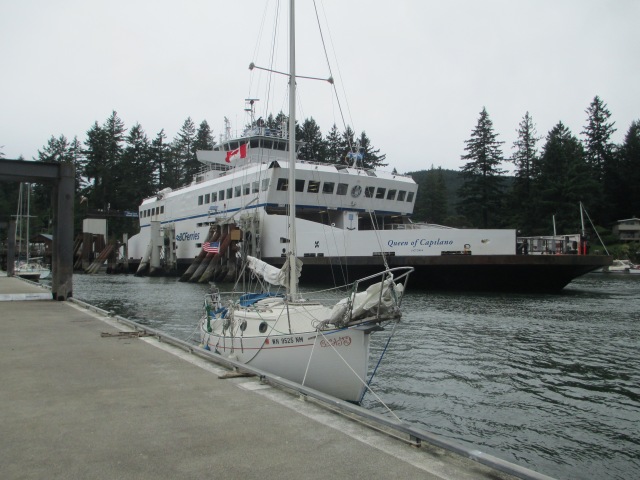 The Queen of Capilano comes and goes quite regularly to the mainland during the day. Their propeller sound resonates throughout your boat.