Posted on September 19, 2018 By sailingwithjosh

There is another YouTube video from Walde Sailing. Click the link for more about Tiffany and Lyndon’s story. They in their Niagara 35, and me in my Flicka 20, tag-teamed down the West Coast of Vancouver Island for 11 days in June 2018. They are very nice and generous people, and I enjoyed their company. The Walde’s documentation of the trip is superior to my own, with their digital movie camera and their four hands to my two. (It’s funny how it is called single handing.) Sampaguita and I get some “film extra” time and some audio referencing. Is this proof I actually circumnavigated? The Chicken Alfredo was delicious, the Cinnamon Rolls were even better, and we did not have any trouble finishing the bottle of homemade Blueberry Wine. Check out Walde Sailing’s latest YouTube video.

I departed Bull Harbor with a destination of Quatsino Sound on June 9th, 2018. While I left before the Walde’s, they soon passed me as I hung back and waited for slack water over the Nahwitti Bar. Published information suggests transiting the bar at the high ‘stand of the tide’ and, reconsider, with heavy wind or ocean swell. On this day, I crossed at the recommended time, and it was a non-event. 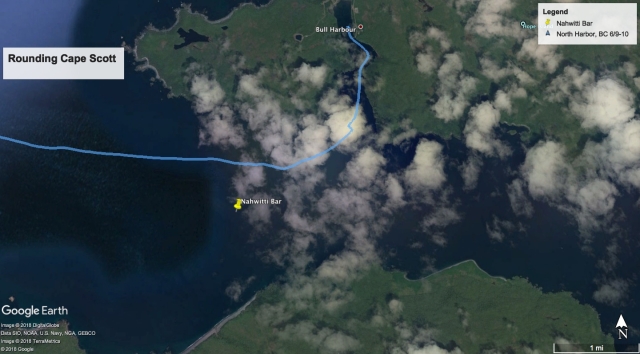 I continued on under sail, which meant slow and less consistent speeds. A series of squall lines from the south passed over, each giving me a boost, and at one point, hailstones pelted the boat. I was riding an ebb tide, the south wind continued to build on the bow, and chop began to develop. I calculated the distance I needed to travel and determined a need to move faster. It was a necessity to round Cape Scott before the tide reversed to flood, so I started the outboard motor to make better time. On the way, I encountered the humpback whales the Walde’s caught on camera, though the Walde’s were far ahead of me by that time. (Did you watch the video?) 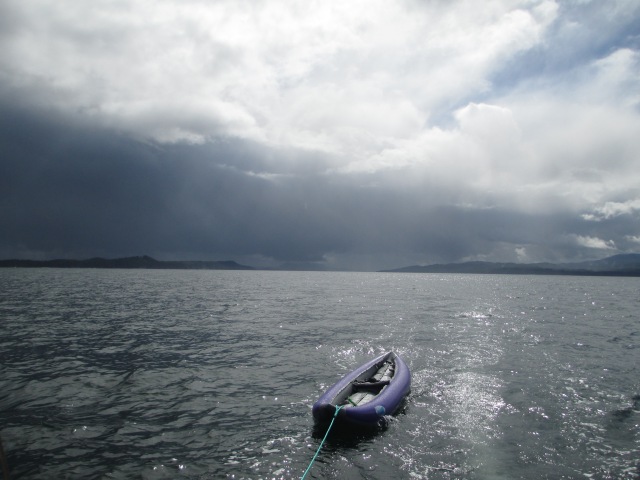 The wind and chop continued to build, though the squall lines had passed, and the sun was shining. My strategy was to round the Cape with the last of the ebb tide to mitigate what I expected to be turbulent waters. If I could not get around before the flood set in, it would be a very slow and uncomfortable rounding. I just did not have time for this and may have even needed to return to Bull Harbor, 18 miles away. I was happy for some prior ocean experience in Sampaguita when I sailed up the West Coast of Vancouver Island in 2016. Though the swell and chop made for uncomfortable seas, often coming together in pyramids of water, I was not intimidated and beyond my experience. 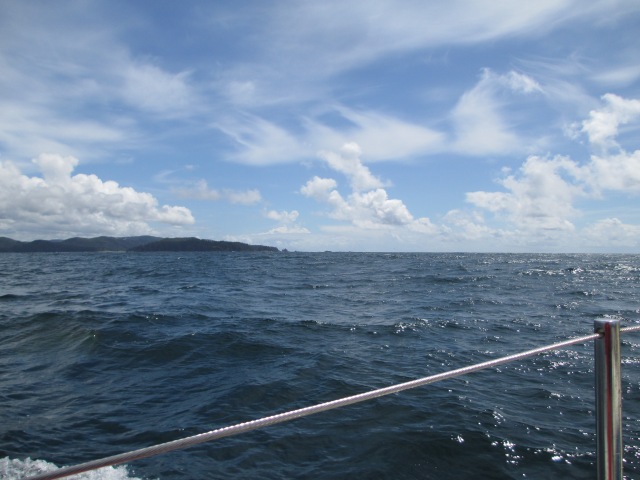 I was towing my inflatable kayak, which was a calculated decision. In the boating community, there could be significant controversy around this choice. First, my decision was based on the kayak causing very little drag. Second, I have a long tow rope. Third, as a Flicka 20 has limited storage and deck space, there is not a life raft (more controversy.) The inflatable kayak would double as my life raft if needed, but only if it was already inflated. Once inflated, it neither fits in or on the boat. If it untethered, which is the argument against towing a dinghy in such seas, it would likely be lost to me forever. I had the towing rope uncoiled to its full length, which was about 40 feet. This would keep it at least one wavelength back and limit the snapping force of the line becoming suddenly taut. In the steep chop and pyramid seas, the kayak would sometimes launch off of the waves. Once I was committed to the towing decision and rounding the Cape, there was no making a different choice.

The outboard motor ventilated twice. This was caused by the propeller lifting out of the water when short, steep waves raised the stern. The reduced resistance caused the engine to quickly over-rev. When the stern plunged down into the trough, it submerged the over-revved propeller and bogged the motor down. This is terrible for the motor’s health. To minimize this, I tacked through Scott Channel. This meant I was taking the waves at a 45-degree angle rather than straight on. I would travel a greater distance and take more time, but this choice seemed far better than damaging the motor when I needed it most.

Alas, I made it around the Cape and away from the clutches of the flooding tide. I recalled from my previous ocean experience (yes, I had forgotten) that swells and chop reduced my motive power by about 26%. Instead of a top speed of 5.7 knots, it was more like 4.2 knots. This equates to 36% more fuel AND 36% more time used when traveling on the ocean.

Since fuel on a boat is more accurately correlated to time traveled at any given rpm, rather than mileage or speed at that same rpm, we see how the math works out. Follow? These changes of efficiencies are caused by the energy being lost to pitching, rolling and traveling the extra distance added on by going up and down the swells. What you gain on the downhill, you lose on the uphill. Not only can you see this in your speed, but you can hear it in the laboring motor.

As the Walde’s mention in their video, the Southerly swell and wind made a stopover at Sea Otter Cove, and any of the other coves along this section of the coast, out of the question. Southerlies run directly into these coves. While passing a mile or so off Sea Otter Cove, I could see the large swells breaking over the submerged reef just outside the entrance and to the northwest of Winifred Islands. The immense power was intimidating, and if caught in these breaking swells, complete annihilation could be expected. No joke. With no refuge, I was obliged to make it to Quatsino Sound. I also quickly realized I was in a race against the setting sun. Because I had to time the earlier crossing of the Nahwitti Bar for 10:10 am, I lost a few hours of navigable light in the morning. The race was on……at about 4.2 knots…..with hours still to go. 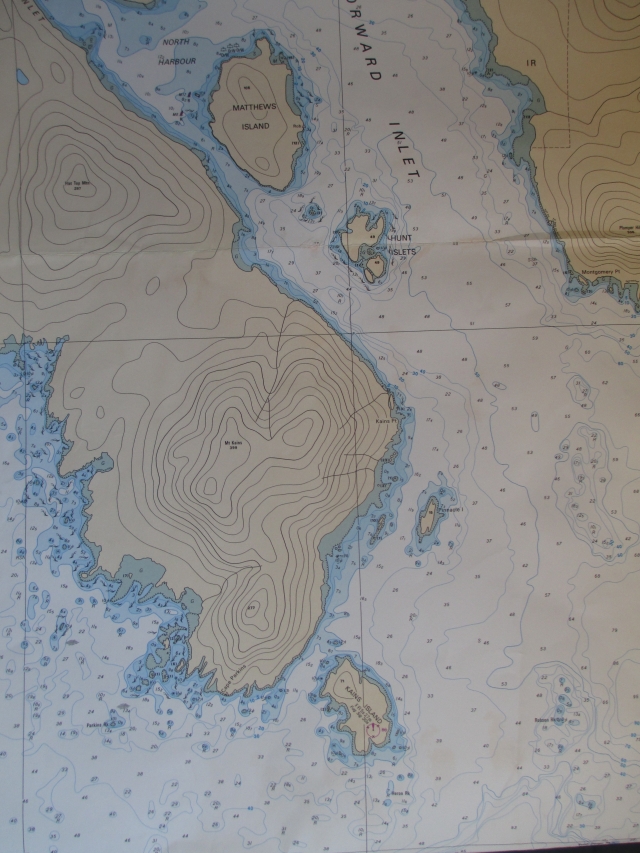 I approached Quatsino Sound as the sun was setting. I turned on the navigation lights and put on my headlamp, its red light for night vision. The paper chart in one hand, the tiller in the other, I rounded Quatsino Lighthouse on Kains Island. To avoid Robson Rock, invisible to me in the fading light, I stayed in close to Kains Island. Two fishing trawlers working in the area piloted around me as I made my way. It was a nerve-wracking experience, not knowing if they were dragging nets or lines. I accepted their right-of-way, but with the light dwindling, I pressed on. My destination was the North Harbour anchorage behind Matthews Island in Forward Inlet. I chose the shortest route, a narrow channel to the west of Hunt Islets and Matthews Island. With the deeper water of the high tide on my side and staying in the channel’s center by judging the shadows and silhouettes, I made it safely through. Almost there, I pulled out my searchlight in an effort to find the two red nuns indicated on the chart off the west side of Matthews Island. They were not to be found, so I just gave the area a wide berth. I could see the Walde’s Niagara 35 anchored in the harbor. I used them as a reference point to select my own spot, dropping my hook in about 30 feet of water.

I arrived in North Harbour as the last bit of twilight faded to black. After a long day, it was a relief to be at anchor. The day’s experience highlights two reasons I plan my expeditions for June. One, to take advantage of the longest days of the year. Another, there are fewer boats out traveling. What if I arrived and the anchorage was full? 14 hours and 31 minutes of travel, a distance of 58.19 NM, the anchor was down and secure at 11:05 pm. Exhausted, the next day was destined a rest day. I did the “putting the boat to bed” chores (well, most of them) and heated up a much needed can of chili. After my fill, I crawled into bed and quickly fell asleep. What a day!

The Walde’s at Anchor in North Harbour. I used them as a reference point while anchoring in the dark the night before. 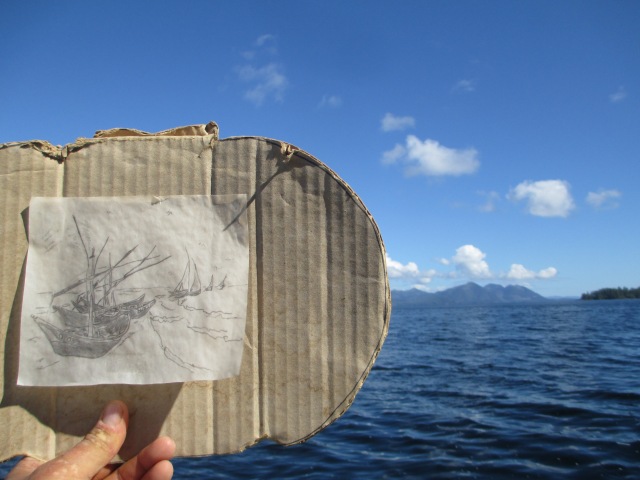 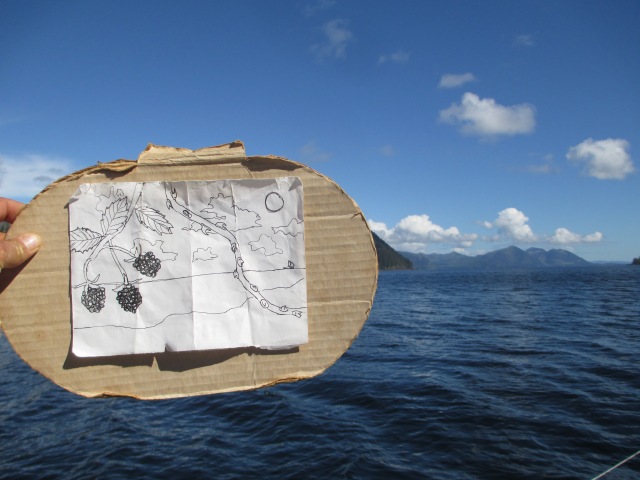