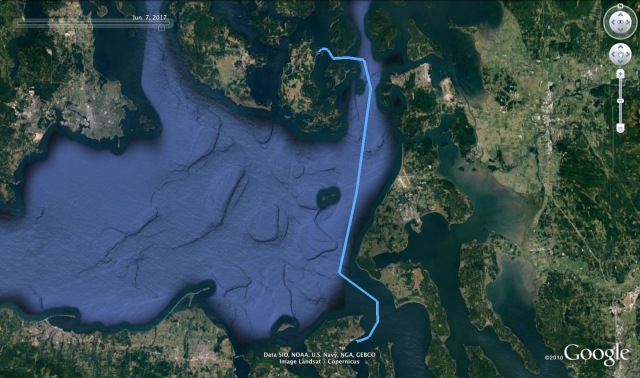 I woke up with the intentions of going ashore, provisioning at the Safeway, getting some fuel, charging some electronics(phone, computer, camera, VHF) and buying Bob some beer. But as I made tea, ate some breakfast, and did the dishes, the wind started to build from the South. Port Townsend seems to have its own microclimate which doesn’t correlate with any of the area weather forecasts, so especially as a non-local, it is difficult to predict what the conditions will be. A South wind puts you on a lee shore in a marginal, unprotected anchorage. A great town, a crappy anchorage. The wind was maybe 15-20kts which by itself is not a concern, however there is enough fetch to get significant wave action and a disadvantage of a small boat is these waves have a negative effect on your comfort, realized by a pitching motion. I could see some larger boats anchored nearby that clearly had a steadier motion. My anchor rode was taunt but the anchor was holding fine. I wasn’t sure if conditions would worsen, so I was hesitant to leave the boat and go ashore.

I stuck it out for a couple of hours, before I was fed up with the motion and decided I was “outta here.” I figured if I started the outboard in these conditions, it would ventilate in the wave motion until I could get the boat moving, however, an advantage of a small boat is that I find it pretty easy and safe to sail the boat in and out of anchorages. So, sail out of the anchorage is what I did, which is something I know owners of bigger boats would be hesitant to do. I relish it. Now the race was on to make it around Point Wilson before the ebb turned to flood. If I missed that window, I might have to retreat to Port Townsend. This is the entrance of Admiralty Inlet and most of the water that floods into Puget Sound comes through this entrance and the currents can be enough to halt a small boats’ progress. Comparing the advantages and disadvantages of small boats to big boats was a common subject of ponderance on this trip. Its cliche, but every boat is a compromise. 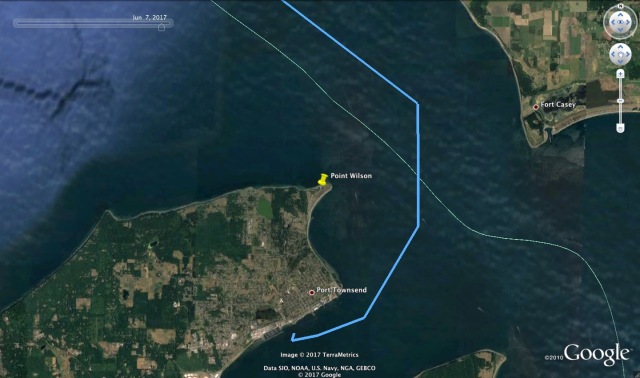 I sailed out with one reef in the main and the working jib. Once confidently underway, I put a second reef in, only to be shaking it out by the time I was a couple miles out. That damn microclimate. Once I reached Point Wilson, the wind was essentially non-existent and I had to motor up as the tide was just turning. In fact, the Straight of Juan De Fuca was calm and I motor sailed the rest of the way to Spencer Spit. Some boaters would say that it was ideal Juan De Fuca crossing weather. I prefer some wind.

Here is a picture of Bird Rocks which are in the middle of Rosario Straight. These rocks have significance for me because one of the scariest moments of my boating career…so far… involved nearly hitting these rocks. To boot, my friend Kim was on board so I had the responsibility of someone else’s safety weighing on me.

It was 4 years ago and my first time crossing Rosario Straight and my first extended trip in Sampaguita. I didn’t expect the currents to be as strong as they were and due to this, my piloting was faulty. It was a windy day so I had the sails up, but also had the motor running to make the unknown crossing. The currents swept us down towards these rocks and I kept increasing the throttle on the engine, yet I could not seem to get the forward motion on the boat I needed. I also recall almost changing course at the last moment, as it was feeling desperate, which in hindsight, I think would have been a terrible idea. Ultimately, I believe what saved us was that the water current was forced around the rocks and carried us with it. I remember reaching back to ease off the throttle afterwards and realized it had been on full. We were all in. It’s also possible danger was not as close as it felt, but the experience and these rocks are firmly printed on my memory.

I arrived at Spencer Spit, a Washington State Marine Park, via Thatcher Pass that evening. Spencer Spit is on Lopez Island and I had reached the San Juan Archipelogo. I very much like that word. Rather than pick up a buoy, I opted to anchor. I chose the North side as the wind was predicted from the South. I have included a picture of the many sunsets I was to see as well as a picture of Sampaguita at anchor and a Washington State Ferry passing by. 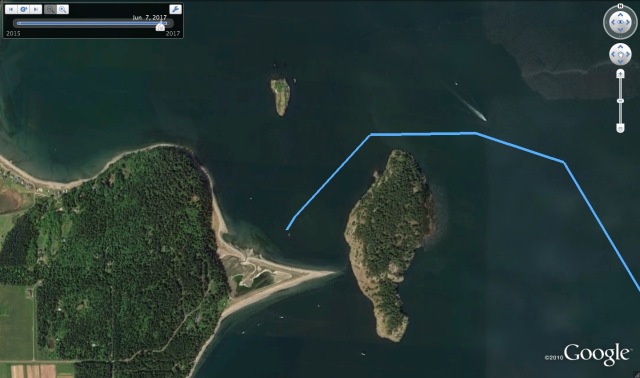 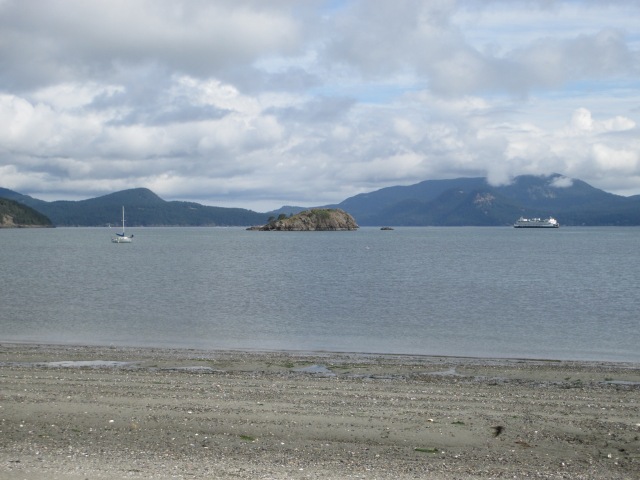