Explorations and adventures of sailing and living aboard.

On Day 3, I went from Mats Mats to Port Townsend via the Port Townsend Canal and Port Hadlock.  I originally planned to take my time in leaving, but upon checking the current chart for the Port Townsend Canal, I realized it would change to a flood earlier than I originally expected. The VHF weather forecast also said it would be blowing 20-25 knots from the South which would have these two elements opposing. A strong wind blowing against a strong current means short and steep waves. I was also recalling a dock mate telling me his experience in these conditions in this canal. It was a story of anxiety, so I quickly got ready and weighed anchor in a race to make it through before the current changed.

Sure enough, the wind was blowing as predicted which put us into Small Craft Advisory territory. Technically, my 20ft boat is considered a small craft, but it is built well, so it’s the inexperienced mariner part that applies most. I do not have an anemometer on board, so I have learned to guess the wind strength by the feel of the boat and the sail I can carry. I decided I would go straight to the second reef in the main sail, so I motored clear of the land, pointed into the wind, raised the sail, applied the reef points and then turned for the downwind sail. The seas were running and my little boat will roll and yaw quite a bit, so just when I had the boat pointed in the right direction, BAM!, the boom unexpectedly jibed across. I had not yet had a chance to rig the preventer or adjust the topping lift. The reefed sail area is quite small, so the force was not so great and the boom missed my head on the way across. What got me was the slack line for the first reef point which hadn’t been applied because I went straight to the second reef. It draped down below the boom in a loop and this went right across my face. I thought, “that’s going to leave a mark” but was most thankful it didn’t pull my eyewear off and send it overboard. With all this action, there is no time to check for beauty so I rigged the preventer, lowered the topping lift, tidied up the lines, raised the motor and got the boat settled in for the run.

My efforts to beat the flood to the canal were in vain. I could see the standing waves but was committed by this point. I said, “I can do this, in fact, the wind is strong enough, I think I can even sail through this.” I did lower the outboard and start it for ‘just in case,’ aimed for the center of the channel and sailed into the canal. Our forward progress was pretty slow, oscillating between .5 and 2 knots, but the south entrance was where the big waves were and once through that, my confidence level increased. 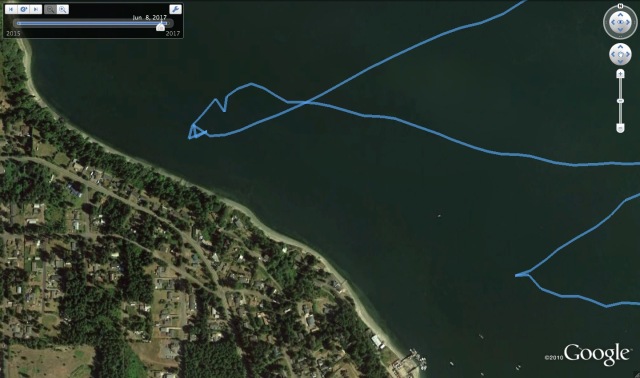 The wind was still blowing in Port Hadlock and I did not want to be in the anchorage off of Port Townsend if the South wind was also there. I decided to anchor in the lee of Irondale as it looked like there was a little protection there and wait it out. I got the idea from another boat that I saw do this. Here I cooked some lunch and tidied up the boat from the mornings rush. After a bit, I weighed anchor and sailed to Port Townsend. The wind direction had changed to the North, so it was a beat to windward to get there, however this is a favorable wind direction for anchoring in PT, where I planted the boat between the Boat Haven Marina and the Ferry Dock. I inflated the kayak with intentions of going ashore, but instead entertained guests whom came to me. First was my friend Bob from Admiralty Ship Supply, who brought his skiff out with some libations, and then Thomas the Pirate who was in town as a spectator for the start of the R2AK, which coincidentally was earlier that day.

Misc. – Sailed in and out of anchorage at Irondale and into anchorage in PT.

If you found the information in this blog to be helpful or entertaining, please consider a donation toward Sampaguita's refit. She's getting herself dolled up to cross an ocean or two. Thank you.