Posted on October 19, 2017 By sailingwithjosh 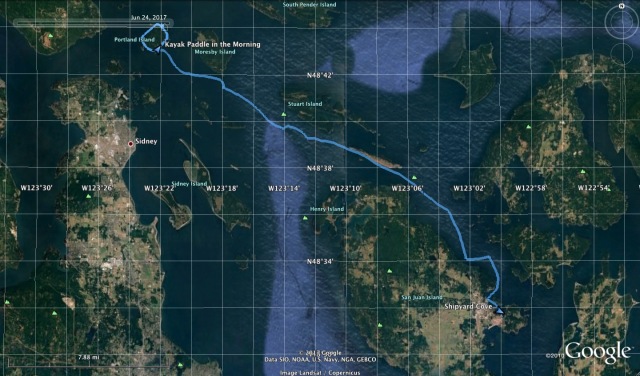 I awoke at sunrise and prepared to paddle the kayak around Portland Island. It would be good exercise and a way to use time before the 9am low tide, when I was going to attempt a retrieval of the anchor rode chafe guard I dropped overboard the previous day. I saw a neighboring boater returning from a similar exploit, but with a hard shell kayak. I would make a counterclockwise circumnavigation with the hope I would get some favorable tide on the way back. 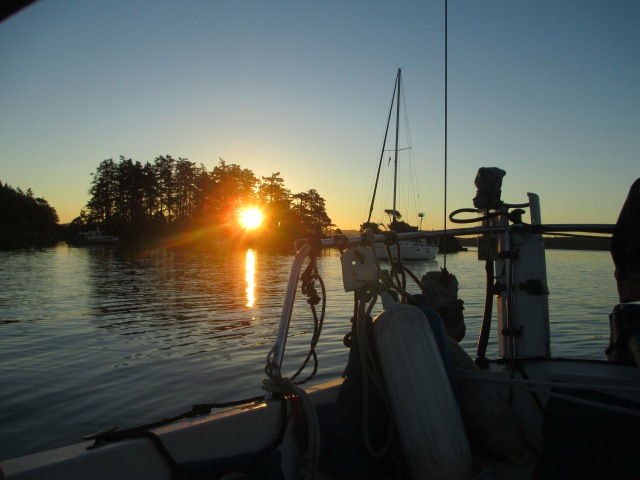 Kayaking Around Portland Island. Of note are the reefs on the NE side.

The waters around the island are reef strewn and the current flows dramatically through these reefs. This makes them unpredictable. There was also a challenge to stay in water that was deep enough for the kayak. While the kayak only needs a few inches of water depth, the paddles need considerably more. The reefs are a bit jagged, so keeping the PVC inflatable off of these was a priority. It was a great work out physically and mentally to weave through the reefs and currents, especially along the northeast side of the island. 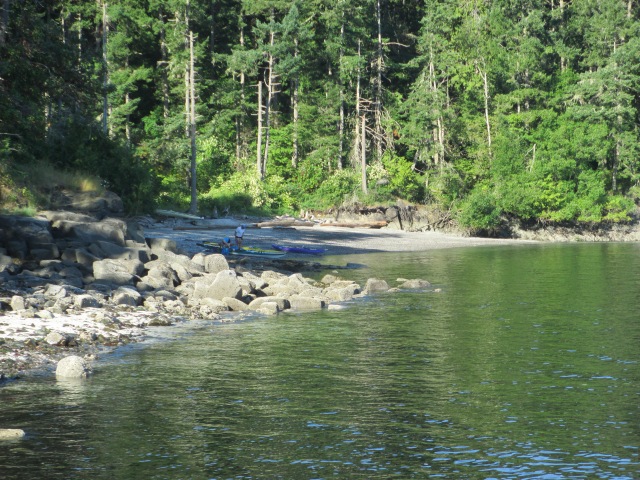 Looking North, Zoomed In. The mountains in the distance are mainland BC.

When I got to the northern most point, I pulled ashore onto a beach just east of Royal Cove. I took some photos and used the outhouse. The outhouse was the nicest smelling outhouse I have ever been in. In true Canadian style of practicality and simplicity, they had a composting toilet with a box of fresh-cut wood chips to the side that you sprinkled on your business when you are done. The dominant aroma was this box of wood chips. If only all outhouses could smell this nice. I suspect that this island is easy to service by the parks department due to its proximity to Sidney and this style outhouse is not yet a norm in all Canadian parks. There were also some campers in this cove as there was an official campsite located here. These folks had travelled in by kayak which is a very common mode of exploration in both the Canadian Gulf Islands and the American San Juan Islands.

I continued on around to the west of the island. I arrived back to Princess Bay in time to plan my attempt at retrieving the chafe guard. I dd not know exactly where I had dropped it but I knew it was likely within a 50 foot radius of the boat. I was going to use the kayak and paddle the bay in a grid pattern. I started with my best guess and quickly located it. The water was clear and shallow at this time and the white piece of hose contrasted well enough against the mud bottom. I used the leadline with a fender buoy to mark the spot, which at first worked well enough. However, the hose wasn’t far from where the boat was and the breeze and current kept swinging the boat around at anchor and into my buoy. This wanted to drag it off the mark and the line eventually got caught between the rudder and keel. For a chafe guard retrieval tool, I took a jib pole and extended it out and then duct taped an extended boat hook to this. Now I had one 14 foot long rigid pole. A big challenge was keeping the kayak in the correct spot. Any force, be it wind, current, or movement of the pole through the water, wanted to push me off target. Another challenge was to correctly judge where the hose was and not be fooled by the water’s refraction. I found that the poles also needed to fill with water for without this, they had too much buoyancy. After about seven tries, I was able to snag the hose and I brought it to the surface with a sense of achievement. Next, was to use the same pole to unsnag the leadline from the rudder and finally to drain the poles of the water. The plan and procedure worked about as good as I could hope for and I had the satisfaction of not littering, not losing the boats gear and successfully creating and completing a rescue operation. To boot, I gave the elderly couple in the boat next to me a chance to “anchor gaze” while I was at it. “What is he doing over there?” 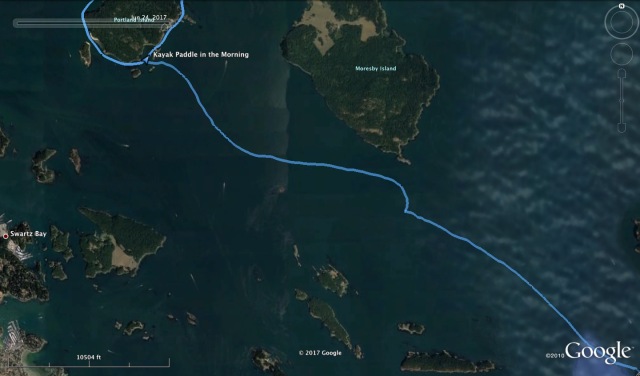 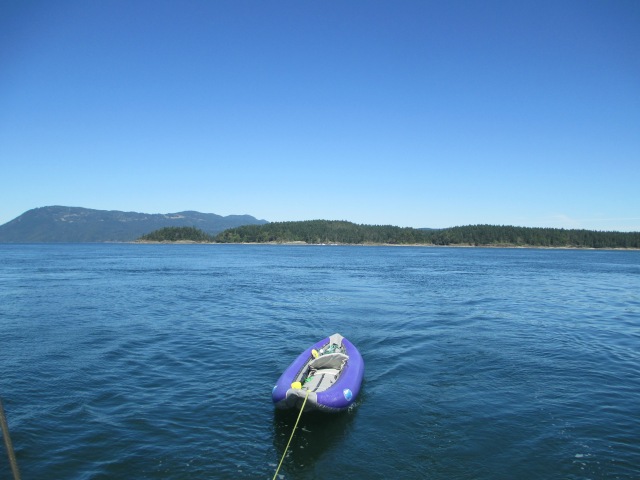 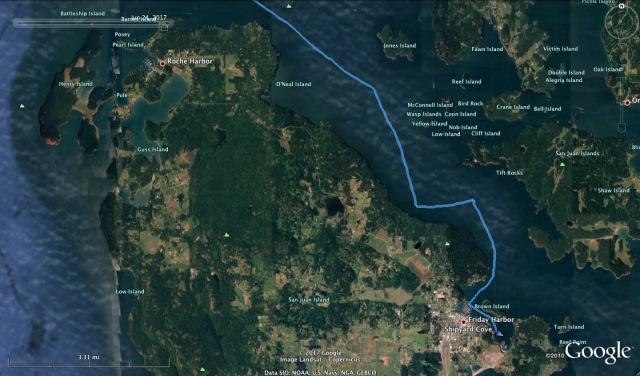 I prepped to leave in hopes that I could play the current into the San Juan Islands. I weighed anchor at 10:30am and motored out of Princess Bay. I quickly got the main and jib up and shut the motor down at 10:38am. I had a brief sail until the wind faded at the Canadian edge of Haro Strait. I started the motor and continued across the Strait. Haro Strait is the main channel for tidal flow in and out of the Canadian Gulf Islands. It is the Strait that separates the American San Juan Islands from the Canadian Gulf Islands, this border established by the resolution of The Pig War. I had some favorable tide here that had me moving up to 7.2 knots, but once across and headed into Spieden Channel the current was against me and slowed me to about 1-2 knots. I have had these adverse currents headed in this direction of Spieden Channel before. I have not figured out what the optimum transit time is relative to the tides. I ground it out and made a play for the inside channel between Spieden Island and Sentinel Island in hopes to get relief from the current. A bit earlier, I saw the Washington State Ferry take this route. I suspect they either did it for relief from the tide or to get closer to Spieden Island in hopes to view some of the exotic wildlife that was transplanted there in the 1970s in a now defunct, private, big game hunting resort.  This strategy seemed to work and the farther I went, the more favorable the tides became. I finally picked up the full flood on the northeast side of San Juan Island and down to Friday Harbor. I was also able to do some sailing here with a NW wind of about 10 knots. 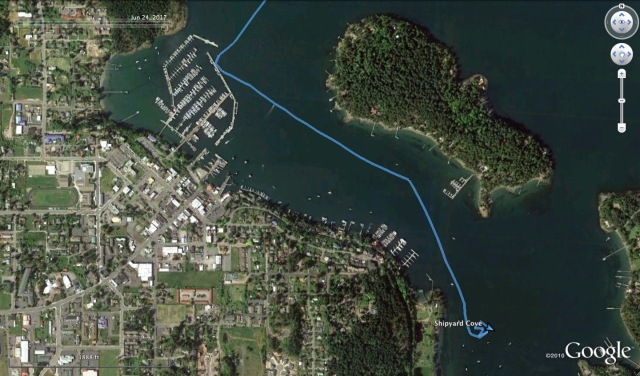 The Customs Dock and Friday Harbor

I  was required to check in with U.S. Customs when I landed for the first time in the U.S., returning from Canada. I went to the clearance dock they have designated for this at the Port of Friday Harbor.  I landed and went to the phone provided and called Customs. I spoke to an officer and he asked the standard questions. What was my nationality? Where was I coming from? How long had I been there? Do I have anything to declare? When satisfied, he said I could go to my slip, but then I needed to come up to the offices on Spring Street and verify the information. I explained that I would be anchoring out. He said I should leave the boat at the clearance dock and come up now. So I grabbed my ID and my boat’s papers, which is a fancy way of saying my registration. Truthfully, there are other documents included in the portfolio of “boat’s papers,” but the registration was all I would need. When I arrived I was met by an officer who asked, “Sampaguita?” I said yes, he said, “Like the National Flower of the Philippines?” I said yes ,“I am from the Philippines” he said and went on to thank me for coming up to Spring Street as they were presently short-staffed.

He checked my ID and my boats papers and that was that. Sampaguita is under 30 foot in length, so there is no fee for re-entering the U.S. as there is for boats over 30 feet. This is a small boat advantage. I bounded out the door and back to the clearance dock as I was interested in getting anchored and settled in, sooner than later. It was a week since my last shower, so I wanted to get that done too. There was quite a bit of bustle going on in the Port and the tall ships, the Hawaiian Chieftain and the Lady Washington were in the harbor. The Lady Washington has world fame as being one of the ships they used in filming the Pirates of the Caribbean: The Curse of the Black Pearl. They were giving tours and getting ready for some sort of “pirate re-enactment” with mock battles out in the channel. Amusing, but not for me.

I sailed off of the customs dock and headed over to Shipyards Cove where I like to anchor. I anchored here for 4 nights in May and it suited me fine to be a bit away from “downtown.” I could paddle into the Port or over to Shipyard Marina. I had friends who used the latter and I could meet them there. 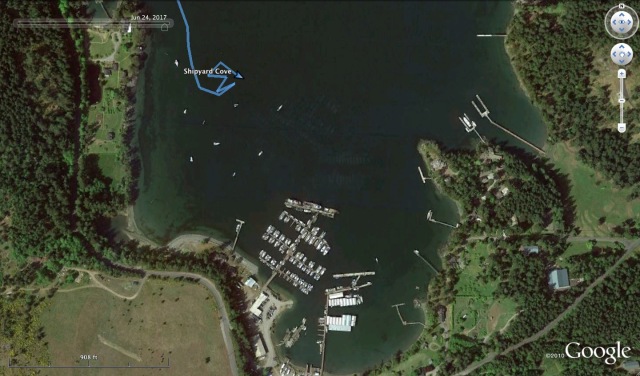 I re-anchored once as I didn’t like my first attempts proximity to an empty, permanent buoy. Once set, I checked the depths at 40 feet and I let out 145 feet of scope. The anchorage was empty and I set to work tidying up the boat, putting on chafe guards and gathering my trash to take ashore. I was planning on being here for a couple of days, so I was making the boat comfortable.

I touched base with my friend Jenevieve to meet about 7pm. She had a skiff at Shipyard Marina and she would come out to the Flicka. This would give me time for a shower and snack. When she arrived, we decided to take the skiff to Turn Island State Park which is just east of Friday Harbor with the highlight being a deer swimming across Boat Channel from San Juan Island to Turn Island. I was very impressed and wished I had gotten a picture of the deer. Then we took the skiff over to the Port and tied up at the Dinghy Dock and went and got some food and drinks. Boats are fun.