Posted on October 31, 2017 By sailingwithjosh

The long marine road to Seattle goes through La Conner. Did I know I was going to go that way when I left Friday Harbor? No. I had originally planned to go through Deception Pass and inside along the eastern edge of Whidbey Island for protection from the forecast Small Craft Advisory in the Strait of Juan de Fuca. The usual and shortest route to Seattle goes past Cattle Point at the southern entrance to San Juan Channel and across the Strait of Juan de Fuca to Port Townsend. I have taken the usual route several times but I was a bit leery with the weather forecast on the Strait. Normally this would sound fun, but not with a compromised shroud.

I weighed anchor from Shipyard Cove at 11am, which was a bit of a late start. With currents, timing is everything and this late start would determine my route. I was on an ebb tide and  I headed east in the archipelago with moderate sailing winds. I had decided to take Peavine Pass which leads the way into Rosario Strait between Blakely Island to the South and Obstruction Island to the North. I chose Peavine Pass because I had never been through it before, and because it was closest. I hoped to get through it and into Rosario Strait while there was still an ebb tide so I could ride the current to Deception Pass.

I have only gone through Deception Pass once and that was headed west, so an eastward transit is on my list. It wouldn’t be this time though. As the day went on and the wind dissipated to nil, I turned the motor on at 1:42pm as I prepared for Peavine Pass. By the time I made it through Peavine, I only had about an hour of ebb tide left. The thought of slogging against the flood in Rosario Straight as far as Deception Pass, which was still 10 miles away, sounded dreadful and downright impractical. So I decided I would turn east into Guemes Channel and checkout Anacortes. This turn then put the flood on my stern and I started to make very good time, hitting speeds over 7 knots. With this boost I was inspired to keep on going and with Seattle as my goal, my only option was the Swinomish Channel, through La Conner. 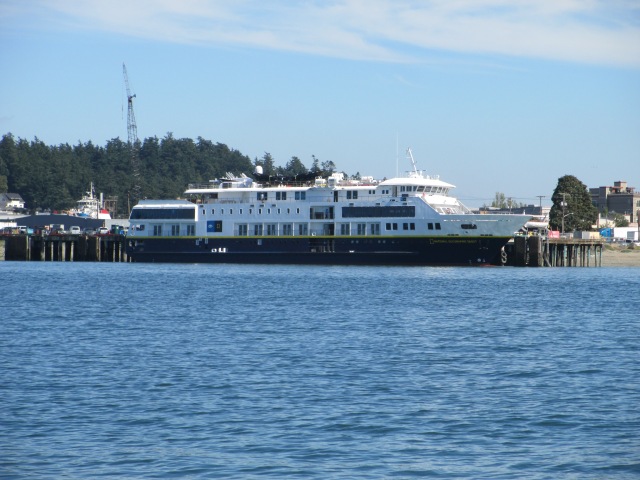 Tankers and Tugs at the Refinery 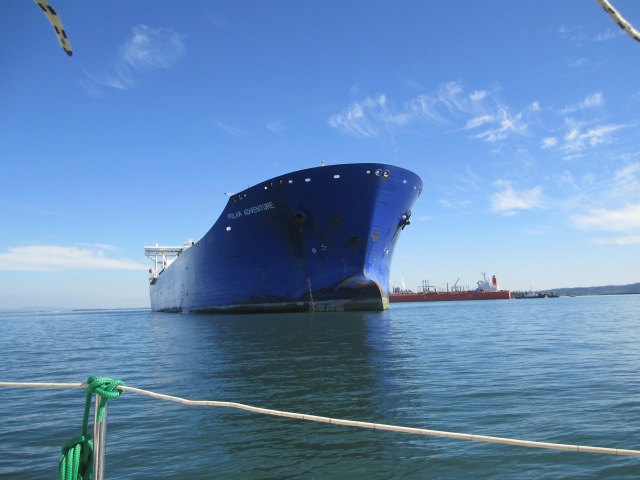 Objects are Closer Than They Appear

I continued on past Anacortes with its shipyards, its massive oil refinery/depot, it’s large vessel anchorage and carefully followed the channel buoys. The channel through Padilla Bay is surrounded by mudflats so it is imperative to stay in the channel. These mudflats are populated with many sea birds such as herons, grebes, eagles and Dunlins. This wildlife contrasts with the massive human industrial complex in and around the bay. I have been this way once before and while La Conner is an inviting little town, this route is not particularly inspiring. It generally requires motoring exclusively, the scenery is mostly industrial and drab, the waters are shoal and the tides can be difficult to read. It’s one major advantage, and this is a big one which makes it necessary and popular, especially amongst power boaters, is that it is an all-weather passage providing an inland and docile route around the Strait of Juan de Fuca with its potential for higher winds and the resultant sea state. This is why I was there.

I made good time and reached La Conner with a following tidal current the entire way. I very nearly pulled up to the city dock for the evening as it was getting late. There was a spot for me and the current was manageable. The tide turns the narrow channel into a river which changes direction four times a day. This can make docking and undocking a bit tricky, especially by oneself. The wind was very light, so I decided to forego the land trap and keep on as I thought I may be able to find a quiet anchorage in Skagit Bay. This was the original plan when I had originally considered Deception Pass.

Hole in the Wall to Skagit Bay

Well, as soon as I passed La Conner, the tidal current shifted to the bow. This was where the floods met and my progress suddenly slowed considerably. Determined to stay the course, I pushed on through Hole in the Wall which is just what it sounds like, a chasm where the channel cuts through a wall of rock. The channel makes a 90 degree turn to the West once you exit the wall and you are thrust out into the open of Skagit Bay. This hard turn creates eddies to negotiate and once through, there was a brisk West wind on the nose. I suspected this was the Small Craft Warning wind from the Strait of Juan de Fuca coming over the saddle of Whidbey Island. The channel here is straight and shoal, with a range set up on Whidbey Island to help guide you out. I was having regrets about not tying up to the La Conner dock and I suppose I could have turned back, but push on is what I did. The going was slow against the wind and the tide but I made it and turned South again once past the final buoy.

I raised the sails, but as I was closer to Whidbey Island now and away from the saddle, the wind had lost some of its spark and the tide was still adverse. Going was slow and I realized that I was running out of light. The anchorage I had imagined I would use, didn’t really exist. I pulled out the chart and studied it, trying to locate where a good place to anchor might be. I wanted to reach one before it got dark and I wanted one that would protect me from a West wind that could blow in off the Strait of Juan de Fuca. Penn Cove was too far. So was Oak Harbor and it has a tricky entrance I have only done once, several years ago. The guide books had nothing for this area either. I settled on Utsalady Bay on the northern edge of Camano Island. It looked like I could tuck in behind Utsalady Point in about three fathoms of water with a mud bottom. It was a high tide so the approach would be fine. I could see where I wanted to go, but it was still about five miles away. That would be over an hour by motor and I was cutting it close as far as light was concerned. I motored up and went for it.

I arrived at Utsalady Point and I decided it would do. It was just beyond dusk. There was a mooring field there with several pleasure craft so I dropped the hook on the outer edge of this field. It might get a little rolly, but would do just fine and by the time the anchor was set, the other boats were just silhouettes against the street lights and television sets ashore. By the time I had tidied up the boat and grabbed something to eat it was midnight. It was a long day and it was debatable that I had made a good decision by not stopping in La Conner. On one hand, I passed up an inexpensive city dock in a quaint little town and pitted myself against the elements of adverse current and wind without having a well researched anchorage plan. On the other hand it appears to have worked out and the anchorage was suitable in the present weather. To boot, this was the first anchorage I have used that I had not been guided to by a book. Up until now, I had played it safe and followed those who had gone before me and have been clever enough to publish books about it.