Posted on October 6, 2017 By sailingwithjosh 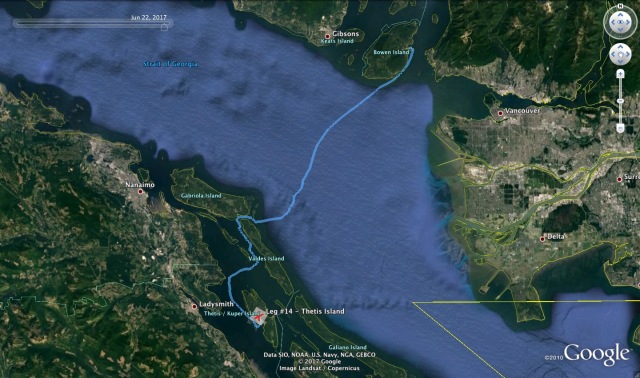 Crossing the Strait of Georgia became my main prerogative, so I decided to wake up early and see if there was a weather window. I had an interest in crossing in more settled weather with the uncertainty of the shroud. This was a bit of an attitude change. I couldn’t ignore the Strait. Thermals can build in the afternoon to 20 and 30 knots. It was the June Frazier River freshet after a high precipitation winter and there was debris in the water.  A window early in the morning would be the best bet and sooner rather than later.  I was on the back half of my trip and if strong winds rolled in, I could be trapped on the east side.

I woke for the 4am Environment Canada update. Environment Canada is the Canadian version of NOAA Weather Radio that broadcasts on the VHF weather channels. The forecast agreed with crossing if I left immediately. It would likely be a 6 hour crossing, with the expectation I would motor most of the way. The predictions of days ahead were of less optimum conditions so I decided to hit it. I started the motor at 4:53am.

I left Snug Cove, following Queen Charlotte Channel to the Strait of Georgia. Winds were light in the beginning with moderate seas, though beamish.  I raised the main with one reef and we made good time, but both the wind and seas increased over the next few hours. Our relation to the wind was good for the main sail, but the beamish wave angle as per my heading were making the boat roll. More so as the waves increased. My heading was 240 degrees magnetic toward Silva Bay, or at least I hoped. The Strait is just large enough to challenge my pilotage on several occasions. There is often a haze and the distance is such that the curve of the earth plays a role and you can’t actually see the opposite shoreline, most of which I have little recognition of anyway. 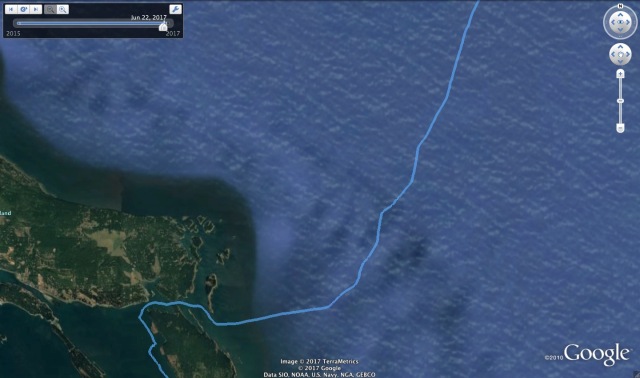 The Approach to Gabriola Passage

As the seas increased, I felt a need to change my heading more to the south. I cracked off to about 220 degrees magnetic.  There was an ebb tide and a NW wind putting our current and wind in agreement and that was good, though increasing our southing. This extra southing started about halfway across. This caused me to miss Silva Bay and by the time I knew where I was, it would have meant heading up wind, against the current to make good. This had little going for it. The location tip-off was the Thrasher Rock Marker which is part of the Gabriola Reef, south of where I wanted to enter Silva Bay.  This was a point of anxiety though not an unfamiliar one. I was never certain of my position the entire crossing until I recognized and comprehended Thrasher Rock. I was practicing steering by magnetic heading and I was unfamiliar with the look of the land.

I experienced this area on the outward leg and I accepted that this was my new approach. With effort and time, I located all of my markers and buoys and used the handheld GPS to help tune my approach. My reasoning came up with two options. Option one would be to try to make it through Gabriola Passage in time to beat the tide or to approach Silva Bay from the protected waters to its south. I decided the first with the second as the back up plan. 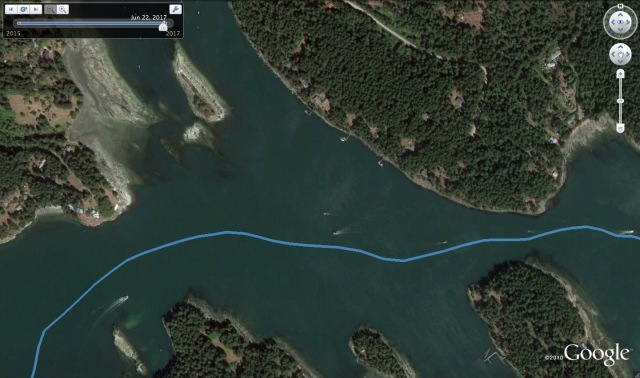 I knew I was not going to catch the tide through the passage, so it was all about getting through before the current became so strong as to stop forward motion. It looked like I could make it within the first hour. Maybe. The flood tide moves north through the Gulf Islands into the Strait of Georgia. So a flood tide in Gabriola Passage was flowing into the Strait and against the Flicka’s direction. This slowed my progress and by the time I got to the bottle neck I had the throttle wide open on the outboard and we made about .5 – 1 knot over ground. That puts the current at  5 knots. Once beyond the bottle neck we increased speed and I believed we would make it. If you recall my outward leg, there is a log boom area just inside the pass in Pylades Channel. I was just entering the Channel from the Passage when to my alarm there was a deadhead about 8 ft to my port beam, floating one foot below the surface of the murky water. If in my path, I would never have seen the deadhead before striking it.  It was 10:30am. 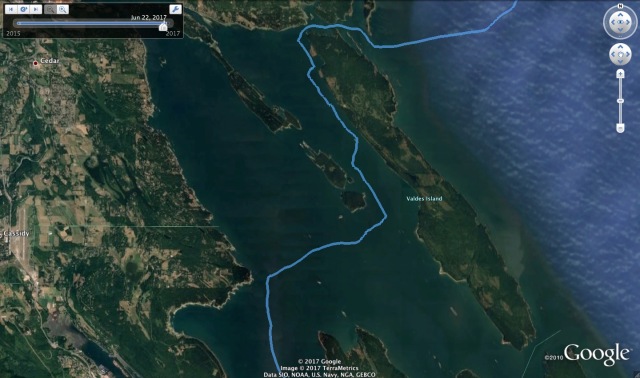 Gybing Down the Gulf Islands. 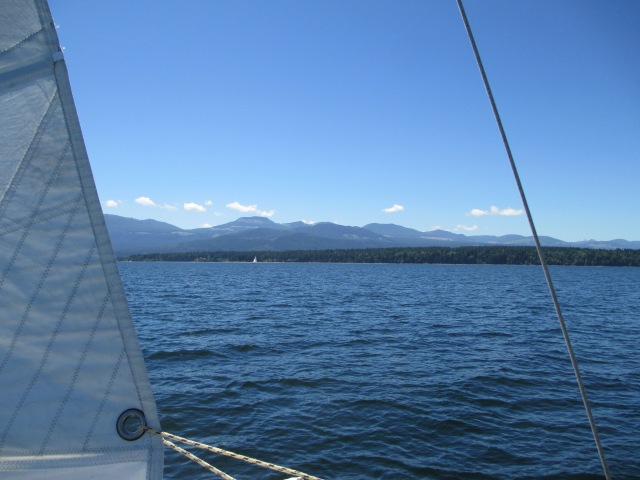 Looking West. The Main is Double Reefed. Vancouver Island in the Distance. 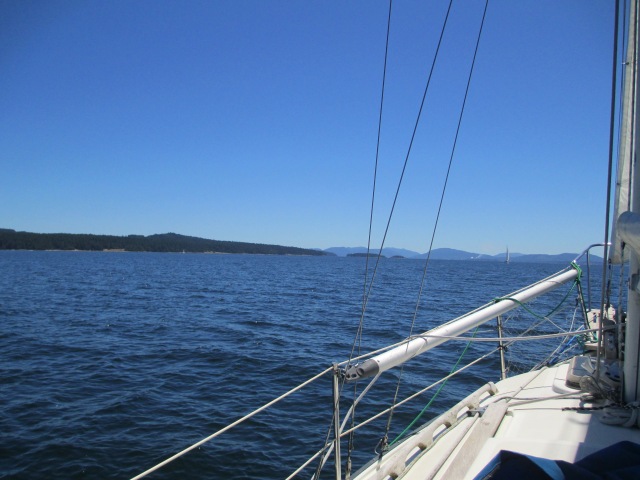 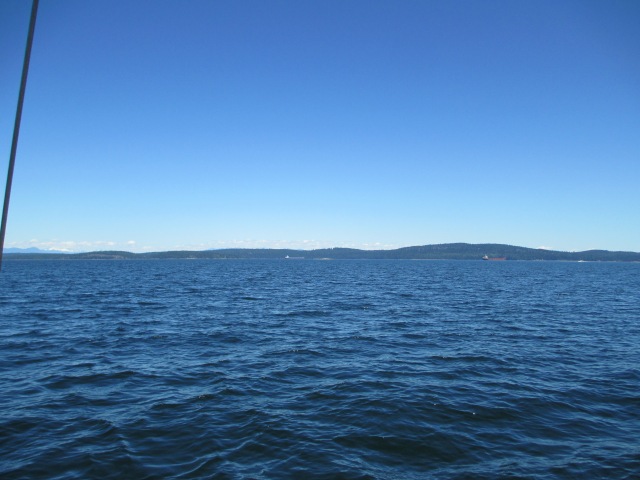 Looking East.  The Mountains in the Distant Far Left is the Canadian Mainland. The Island Behind the Anchored Ships in Trincomali Channel, is Valdez Island.

The day had blossomed into sunshine and I had made it across the Strait and was safely inside the Gulf Islands. At 10:58am I turned the motor off after 6 hours of the dull roar. I then had a good following breeze from the NW, so I gybed my way through the islands. I kept the main sail double reefed until I reached the entrance to Telegraph Harbor. The sheltered waters of the Gulf Islands put me at ease with the rig and I felt I needed to get my mojo back.

My final approaches to Telegraph Harbor had me threading the needle through the rocks and dodging the ferry. I had shaken out the reefs and was using the flooding tide. I finally got tucked into the harbor and dropped the anchor. It’s a tight spot because there are many boats on buoys, shallow depths and there was one other boat anchored when I arrived. I found a good spot off the south end of the Telegraph Harbor Marina with enough room to swing and great shelter from any wind and waves. 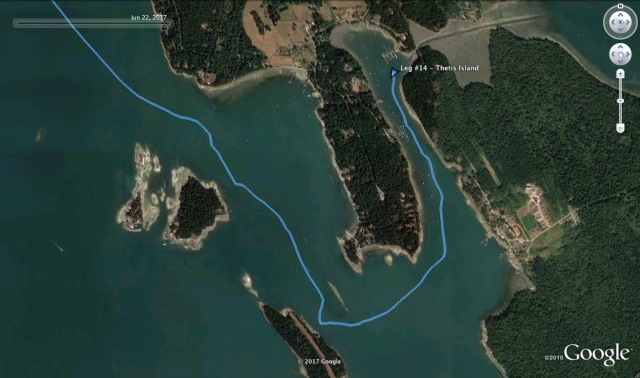 It was about 5:30pm by the time I had the boat tidied up for the evening. I made a salad from the Granville Market produce, read One Island, One Ocean, about the Around the Americas trip and fell asleep early. I woke up in the middle of the night to check the anchor and the lay of the boats. The view of the stars and universe was amazing. 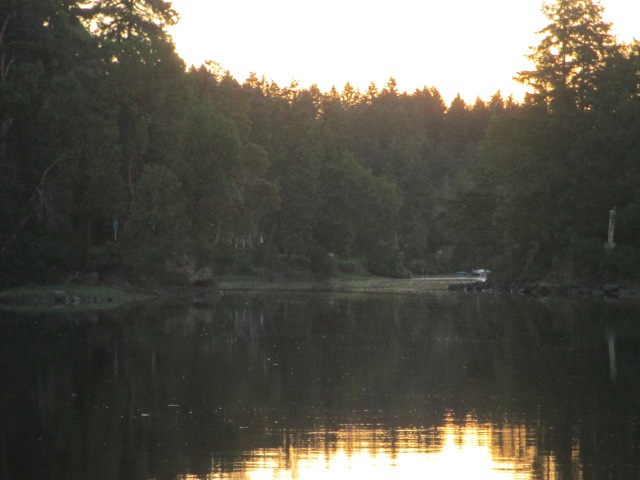 Anchored, Looking East at The Cut. 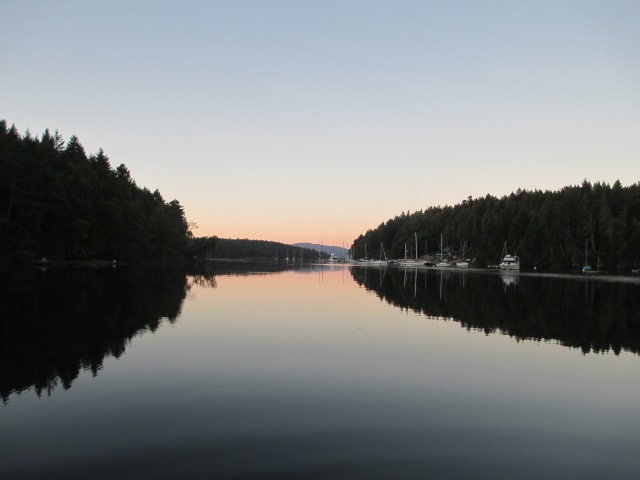 One Comment on “June on the Hook – Day 17 – Telegraph Harbor, Thetis Island”