Posted on August 4, 2017 By sailingwithjosh

Friday Harbor could be considered the main port and epicenter of the San Juan Islands and this was where I was headed on day seven. NOAA Weather Radio was calling for a Small Craft Advisory with winds building from the south in the evening and it would provide adequate shelter. It is a hub for transportation, tourism and commerce and I also where my friend, Jenevieve, was spending the summer. I would get my first shower in a week whether I needed it or not and I would restock my provisions, in particular, fresh foods. I might even be able to top off my fuel tanks and water tanks, charge up my electronics, empty the garbage and rinse down the boat.

Having had a satisfying adventure in West Sound the day before I was ready to move on. I awoke and awaited the breeze to pick up. The wait was short and about 9am I weighed the hook and sailed out of the anchorage. The south wind continued to build and it was quick work to tack down the Sound with minimal current. We were at the bottom of the tide with the flood increasing as I approached Wasp Passage. This would mean I would have the current on my nose, but with the local geography, the wind was backing to the East and strong enough to carry me through, so I hoped. Wasp Passage is quite narrow and rock strewn, however the Washington State Ferry passes through here and its at least 100 times my size, so why shouldn’t I be able to do it? I decided it would be a good challenge. Inevitably, previously said ferry did come through, but while I was just beginning the traverse and I had room and time to move to the edge of the channel. I was fine with this, because if all went well, I would be through before another one arrived. I gybed back and forth through the channel as my boat does not like to run directly down wind. The main sail blocks the wind from the jib and the boat will de-power, which is undesirable as the jib will flop around noisily and I needed to keep the boat moving in order to push through the current. Half way through the pass there is a narrowing of the channel and the chart says “strong currents.” This would be the big test. Our progress was slowed but the aft wind held and once through we picked up both speed and room. I was expecting the wind to shift around to the nose at anytime as the aft wind was only so because of topography and I suspected that once we neared the western edge of Shaw Island, the island to our south, the southern wind would bend around its western corner and hit us head on. While this did happen, it happened later than I anticipated and I was in a good position to adjust to tacking and then it quickly backed around to the South as I exited the Pass. None too soon though, as Shirt Tail Reef, another of the SJI 10 most struck reefs was looming off to starboard.

Once in San Juan Channel I could breathe easier and able to make it down to Friday Harbor in three tacks going nearly hull speed. A Flicka 20, a heavy displacement boat, has a hull speed of about 6 knots, so thats as fast as I can hope to go, current aside. Current will either add to or subtract from that depending on favor. Yes, I travel everywhere at a jogger’s pace, at most. In reality it is usually more like a 3-3.5 knot average as hull speed is rarely achieved. Oh yeah, I also zig zag around and rarely get anywhere in a straight line. It’s really a wonder I get anywhere at all.

I entered the Harbor on the South side of Brown Island to check out the anchorage in Shipyard Cove. I stayed here back in May and liked the location as it had more of a “local” flavor away from the Port where the ferries, the seaplanes and the main visitors marina was located. I had moored here through 20 something mph winds in May that blow over the islands’ saddle but you don’t get any appreciable wave action. After sussing that, I changed my mind and decided to try the anchorage between Brown Island and the Port, just South of the WSF landing. My rationale was this would be closer to the services I needed. I was on my 3rd day without a motor and the building wind and current were teaming up and funneling between Brown Island and the Port.  I sussed the limited room, the wind and currents, my stubbornness against starting the motor and I made my move.

Boy, did I suck on the main stage at the Port of Friday Harbor. Single-handing, I am manning the anchor and the helm, and inconveniently, these are on opposite ends of the boat. The water was deeper than I first figured, so when I let out the initial length of anchor rode, it was not enough. Actually, so “not enough” that I am not even convinced it hit the bottom. With the sails up for maximum windage and the current pushing me back, I was seriously adrift, quickly off my mark and crowding other boats. I hustled back up to the bow and let out more anchor rode. Phew, the anchor caught! Still, I was way off my intended spot and very close to another boat. I would need to pull the anchor up and either try again or reassess. Shoot! Time to start the motor and get safely out of this pickle. So I motored up and retrieved the anchor in front of the whole Port and anchorage. I knew I was being watched and I suppose I should have been embarrassed, but am not sure I was. Rather than be afraid to try, I gave it a go and ultimately did make it out unscathed. However, my heart was beating a few beats faster so to settle down, I cruised back over to Shipyard Cove and pondered whether to anchor or get a slip in the Port marina. There are major convenience factors for the slip, but I don’t want it to feel like defeat. Also, land and convenience are a “money suck” and I was having a great time without them. So I did the only rational thing, I flipped a coin. Heads, I anchor, tails, I get a slip. Tails it was, so off I go.

I stop and top off my fuel on the way. They have a new offering of ethanol free fuel. Score. Then I head over to the visitors moorage and as I pull in I see another Flicka 20 on the opposite side of the dock. Duh, so I take the slip across from her, of course. I get tied in and go about my business of tidying up, topping off my water tanks, rinsing the boat off, charging up the electronics, taking a shower, emptying the garbage, checking out the Flicka across the way and generally living it up in this $26.40 lap of luxury.

I have dinner with Jenevieve, check the wind speeds, which were in the low 20s, and plan the note I am going to write to the Flicka owner across the dock. It is a newer version and in great condition. I was admiring it earlier, taking pictures and comparing features and updates. I checked the serial number and it was the 3rd to last ever built. Dang! I wonder if they want to sell it? 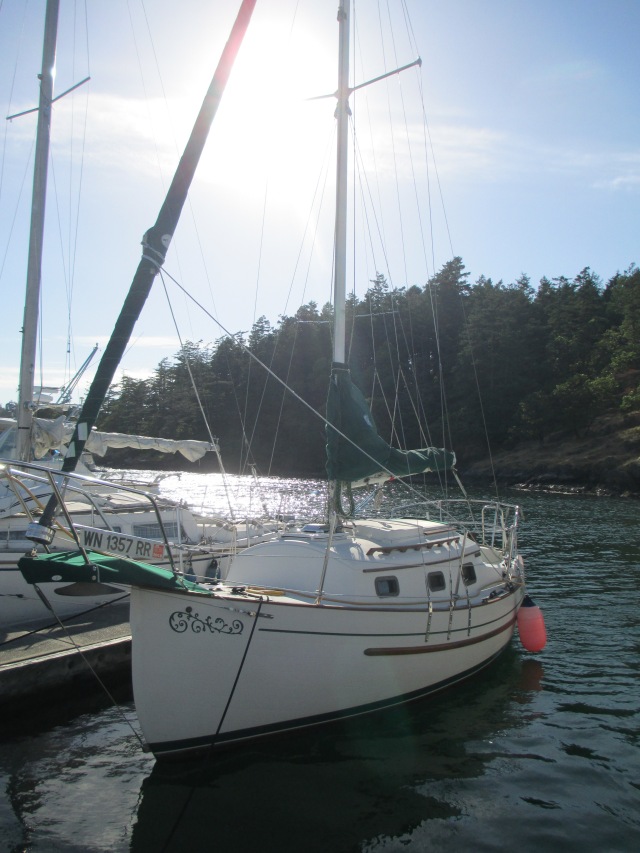